In trying (and this week, not doing such a great job of it) to be more active on my blog, I have started to follow several other blogs that I really appreciate. One of my new favorites is Dynamic Ecology, and while I know very little about the authors, I very much appreciate the type of content they post, e.g. social commentary on science, various links from the week related to contemporary science issues, etc. I appreciate the idea of collecting all the random things I have spent time on a week, albeit they may not be thematically related as they are on Dynamic Ecology. Too, in reading this post on Neil deGrasse Tyson’s viewpoints on the philosophy of science, I was disappointed by the implication that scientists should not be spending time on anything other than what might further their own science. I learn an incredible amount from the non-science non-fiction I read (and really, enjoying something other than work is nice sometimes, too), and so I think it is important to emphasize the need for being well rounded, well read individuals. And so, the things I read this week:

Center of the Universe by Jay Roberts
Thanksgiving in Mongolia by Ariel Levy
What Do You Desire? by Emily Witt
The Love of My Life by Cheryl Strayed

These were my meal-time reads this week, all of which made me incredibly uncomfortable (for different reasons). I’m not sure how Mr. Friedersdorf selected the pieces he did for his list, but these first four all seemed very related to each other, and to the same ideas of what it means to love and be loved, how we as people cope with our existential crises, familial relationships, etc. I probably liked Levy’s piece the best, as heartbreaking as it is.

And of course, a bunch of science papers:

This review was sad, discussing many papers which involved gluing together or removing of insect mouth parts in order to test the hypothesis that the presence of even a non-feeding predator might alter the behavior of prey groups. I was curious about this idea, as we have many, many predators in our plots in PA, and I do want to learn more about how the behaviors of these animals might affect populations of pests or even other predators. There is so much more to learn, since obviously all species have their own inherent identities and preferences, and it may be difficult to make some generalizations across broad groups. I wish I had the time to study this more

Also, can we talk about the implications for human systems? Since I also happened to read this comical piece of genetic selection for group productivity today (also HT Dynamic Ecology), I am wondering how avoidance of certain “predatory” people might affect a person’s outlook for that day, and thereby negatively affect their performance on some metric. I can think of many terrible working relationships, and how collaborations can sometimes be less effective due to certain personality traits, so I can’t help but wonder about trait-mediated effects in humans. I don’t doubt this is incredibly well studied, but I am not going to go down that google scholar hole. Thank goodness no one will glue mouth parts closed in order to test those behavioral responses in humans (or they might, who knows. I guess if one can’t talk, certain aspects of their personality are rendered moot).

Obviously, I am partial, but I much prefer hearing about non-target effects of pesticides on soil organisms rather than the super en vogue bees. Don’t get me wrong, I love the pollinators, but I think the discussion does need to be broadened to include organisms that the layperson barely knows about. Most people have never even heard of springtails before, and it saddens me since 1. All organisms have inherent value and we need to talk about this, and 2. I just love them, they are so adorable. I did just skim this paper, but I do think it is starting a valuable discussion about the likely changes we will see/are seeing in environmental variables in light of climate change. Too, I went to a seminar yesterday in which the speaker discussed the effect of pH on gut flora of dragonflies, and it seems like some researchers are just now starting to consider the various interactions some of these environmental variables play (I say some researchers, because, clearly, many people study these environmental variables. It just seemed particularly novel in the way he presented it, as if no one has ever looked at pH of pond water as a factor affecting microbiome communities. From his talk spawned many questions about the interactive effect of low BOD, for example. Geography, population density of both dragonflies and the microbes themselves, also came up). It seems incredibly difficult to parse out some of these interactive effects, but definitely a worthy discussion.

So, in reflecting on this collection of readings, I am trying to think of a common theme to link them all. I suppose since the non-fiction prose I read was mostly related to how we interact with and feel about the things we love, maybe this post is about how much I love Collembolans. I think regularly about how I did not even know they existed until I started working in my lab, and they invoke such a sense of wonder for me, e.g. How many other adorable organisms exist that I know nothing about (probably many)? How can I, as a conservationist, make other people value organisms that you can barely see? They are such great specimens for discussing the two reasons we care about organisms (based on Samways, 2010): 1. They have value to humans; and 2. They have inherent value. Collembolans contribute a great deal to decomposition, and potentially, controlling fungal pathogens (por ejemplo), which is clearly of economic value for us. But, you know, I’ve said it before and I’ll say it again: They’re just the flipping cutest. 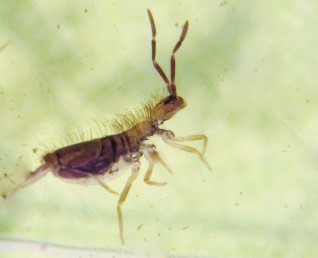 An Entomobryidae from Mexico. There were prettier ones, but for some reason I took no pictures 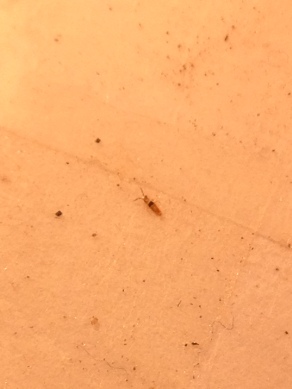 That speck of dirt is a Collembola.