In one of the many conversations I’ve had with my dear friend Rachael since arriving in Mexico a few days ago, we were discussing my dating life and that of several of our mutual friends still living in the city. I mentioned a random interaction I had had with a gentleman at a Christmas pub crawl when I was still living here, and that a friend of ours suggested that the gentleman would be a good match for me. This guy and I had previously been chatting at our various stops on the pub crawl, but of course, I became very uncomfortable once another person pointed out that I should approach asking the guy out on a date. After I told Rachael this story, she said “Soooooooooo socially awkward.” I responded with “Good at everything but dating.” because most days, I am not socially awkward at all, and I can generally carry my weight in most social and professional settings except when it comes to dating. Rachael and I had a good laugh, and as we had been discussing various blog ideas, she suggested that I could make an entire webpage titled “Good at Everything but Dating,” but it seemed much more fitting for a single post.

Despite my solid 20 years of trying to date on this planet, finding a successful long-term partnership is one aspect of my life that I have never been particularly successful at1. I’m almost always single, to the point that even my brother did not give me a plus one to his wedding. Growing up, we did not have the best models of healthy relationships; having been married for 40 years this past November, my parents could be an excellent case study in codependency. While we also grew up with my paternal grandparents, I have never known my grandfather to sleep inside a house, presently or while my grandmother was living. My mother provided the only lesson I ever received from either of my parents about dating and/or marriage: that I should find a man who likes cats. This advice only made sense years later when my mother told Rachael that when she first met my father at the age of 16, he was lovingly caring for a disabled kitten (I wasn’t present when my mom told this story and I know nothing about the name or long-term survival of the kitty, but my parents tend to hoard animals so I am sure it lived a long and healthy life). This background is important in my context, as my parents in many ways threw my siblings and I out into the world to figure things out for ourselves. For some aspects of life (e.g., career, interactions with people, participating in our communities), we turned out fine, and in others, I still have a lot to learn (i.e., dating).

Many of my xennial peers (both women and men) have prioritized their careers over other aspects of their lives. Much has been written about many in my age group delaying home purchases, marriage or other life “achievements” which are typically associated with “success” in the United States, in large part thanks to student loan burdens and the Great Recession. Personally, it was never necessarily a choice to prioritize my career, it just happened. I have had multiple periods in my life in which I’ve worked day and night jobs 7 days a week just to survive, which can seriously limit one’s ability to prioritize finding a partner. Likewise, the insecurity of piecemeal work, short term contracts, lack of health insurance, etc. that I’ve had to deal with in many of my positions (including when working for the federal government), required that I’ve moved often for work in the 14 years since finishing my undergraduate studies. Moving excessively—my dog and I have had 10 addresses in as many years—does not benefit one’s dating life, as it is incredibly difficult to sink in and commit to spending time with someone when you know you will likely be leaving in a matter of weeks or months.

However, what I’ve lacked in strong relationships with potential partners2, I have more than made up for in my strong relationships with places. In contrast to my interactions with humans, I can interact with places at a deep and meaningful level in a very short time frame. I recognize this can happen with humans, too, but I am much better at learning the quick and dirty about people when I have limited time with them, like their favorite restaurant, rather than the value sets that might make us compatible as life partners. As such, the personal growth that many of my friends and peers may have done through dating is the same that I have done through regular relocations; I just have neighborhoods standing in for people: that weird guy that’s maybe a little too out there, even for my family? Portland; the boring man, who never leaves his home town but would pay a great dowry in cows? Hanford. The things you can learn about yourself and others when completely outside of your own culture, language, and general way of being are, of course, incredible.

To put it more eloquently than I could, William E. Glassley states (2018):

“Inevitably, commitment to place becomes personal — our identity is affected by the time we spend walking the fragment of Earth that has captivated us. The chosen place permeates being — terrain embeds itself under fingernails, tangles in hair, makes skin bleed and scars the heart and mind. Every thought, conscious and not, becomes riddled by knowledge derived through wandering there; remembered vistas from that world unexpectedly insinuate themselves at random times and in unanticipated ways, forcing an acceptance of a link between what we experienced there and what is lived in the moment here. We are composed of where we have been and what we have seen.

When I left Mexico for Arizona a year and a half ago, I was so incredibly emotional about it, to the point that I could not return to what I consider one of my homes, Mexico City, until now. I was afraid that seeing her again would send me into a spiral of sadness, in the same way that a break-up with someone might for many people (“We just need different things”). When I left, I was also ending an abusive relationship with a workplace that brought me more pain than joy, even though I loved the work, and I needed to separate from my existence here. Moving to Arizona seemed like a nice rebound… we could learn a few things about each other and ourselves, and acknowledge a little beauty in life, but it wasn’t meant to last forever. After a successful rebound in Arizona, I’m ready to move on from seeing Mexico from a place of sadness, and able accept the connection between what I lived there and what I am living now. And again, in contrast to my relationship with past boyfriends, I can still love a place and spend time with it without having “to marry it” so to speak, that is, be with it permanently. Mexico will always be home, even if I can only spend two weeks a year here. And from my perspective, once I find someone with as much love and deep connections for places in the same way I love my various homes, maybe I will actually find someone with whom I am compatible.

1 Realistically, dating and human relationships are challenging for many people. In social situations, please help get away from making single people feel like an “other” though, and ask them anything else rather than the basic “Are you seeing someone?” or “What do you do?” (not relevant, but also a boring question). This list has a few good questions that I personally would rather answer than discussing my dating life.

2 By “lack”, I mean in terms of time. I am not at a loss for human connection and certainly value my independence, which is also in part why I am perpetually single.

Mexico City is so beautiful, the trees being one of my favorite parts about it. 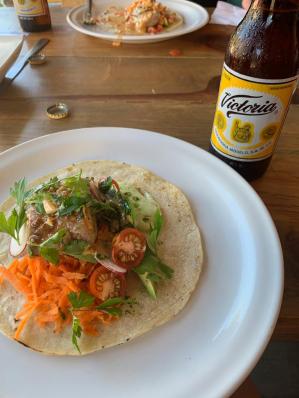 Home is where ever there are delicious tacos, let’s be real. 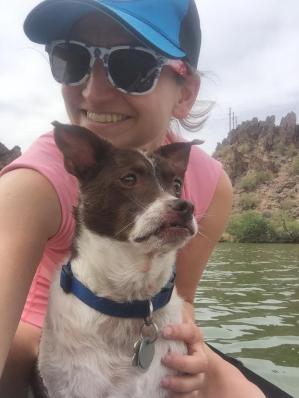 The only man I really need in my life. He and I are always happy exploring together.

Met a Palauan woman the other day (maybe a few years younger than me), who has a law degree from the US and dual-citizenship, but now serves as a Special Assistant to the Vice President of Palau. As she finished her degree, she decided to forego her earning potential in the US to move to Palau, a country she hadn't actually spent that much time in and where the minimum wage is $3.50/hr. Sandy Hook was recent to her graduating, and she struggled with what type of life she'd be providing her kids in the US. What little I saw of Palau was beautiful and everyone was so kind and creative, and I'd probably be right there with her if it made any kind of legal or logistical sense. But this is not an advertisement for everyone to go Columbus other countries since ours is pretty shitty these days, but a reminder that there are other models out there that we can look to... not only for how to create a safe and healthy life for all (their conservation programs are banging, so this includes non-humans), but for how to slow down and reduce our collective need to hoard money and things.
I'm such a fairweather surfer... Give me the soft, "forgiving" beach, as my colleague explained it, with that nice black sand from the river, and the kind little waves. So fun shredding here.
Fell in love with the Pacific almost 20 years ago when I had the opportunity to work on the Marshall Islands. I haven't been back to this region since 2005, and holy smokes... You can't necessarily forget how beautiful these islands can be, but you can certainly feel some sort of nostalgia or general topophilia, for the unique habitats, amazing colors, kind people, etc., etc.
This goofnut has a noggin problem: he needs to rub it on weird things.
Closed the loop on a leadership role I never saw myself filling today. Can't say my time was a complete success, but considering the circumstances, I guess it went OK. Thanks, Chicken, for taking the time to enjoy a happy hour beverage with me to celebrate.
"So, what you wanna do is, keep your eye out for the girl. She normally has treats in her pocket. The black dog will try to chase you, but he just thinks you're dogs. Otherwise, just have fun and eat all the poison oak!"
It was only a matter of time before Spice Girl got some music, obviously. I'm obsessed with this sweet girl, her peppermint cravings and her love of scritches.
Since I grew up with *thousands* of chickens, I totally take it for granted that people have chicken experience. I just learned recently that Willis has never held a chicken before, so obviously we had to have a photo shoot for #myplmorning 😂😂😂
Ordered some more cheeps from @cacklehatchery which arrived perfectly safe and with great support from @uspostalservice. Looking forward to watching my #jerseygiantchickens grow!